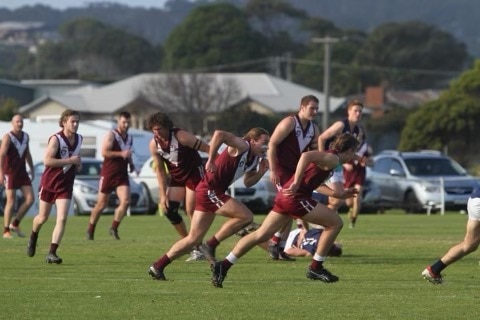 A country Australian rules football match ground to a halt at the weekend after clubs waited nearly two hours for an ambulance to attend to a player with a suspected spinal injury.

“Everyone around it could hear the cracks and the force of the impact and he just didn’t move from there,” he said.

“We always fear the worst when it’s back and neck and spinal-related, so everyone was in a bit of shock,” Mr Nettleton said.

“I suppose we think the worst but hope for the best.”

The game was at first suspended, and then cancelled, after it became clear an ambulance would not be arriving soon.

Ambulance Victoria staff called trainers back half an hour after the first call to try to assess Mr Pescod over the phone.

Two off-duty paramedics from the netball team then organised to pick up an unstaffed ambulance from the local station and took the man to Bairnsdale hospital.

“We believe it was two hours from the point of the accident to the point where he left the footy,” Mr Nettleton said.

“We’re very thankful for those girls that went and retrieved the ambulance and decided to log on on their day off,” he said.

Mr Pescod was eventually cleared of serious spinal injury but received heavy bruising to his back.

Ambulance Victoria was contacted for comment and said it was preparing a response.

ABC Gippsland will deliver a wrap of the week’s news, stories and photos every Tuesday. Sign up here