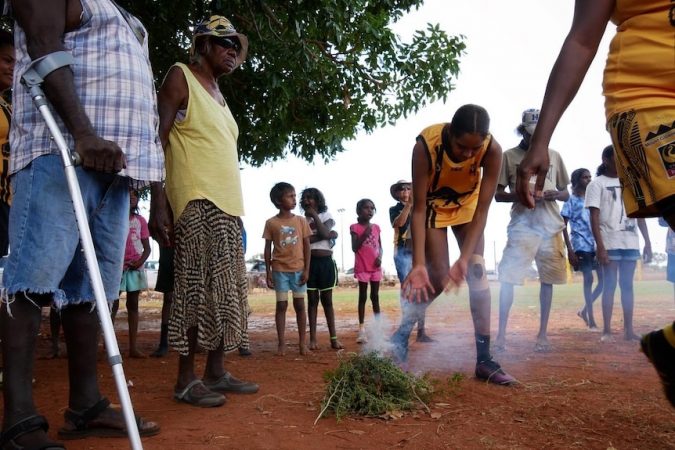 On a red dirt field with only sparse patches of green, the Bidyadanga Emus have pulled on their footy boots at the team’s home ground for the first time in two seasons.

Access restrictions into remote Aboriginal communities, imposed at the start of the pandemic to limit the spread of COVID-19, were lifted last week.

The easing of the travel ban means sport and cultural activities can return to normal in communities because visitors can now enter for non-essential reasons — and one of those is football.

At a smoking ceremony marking the start of play, elder Angelina Nanudie was excited to celebrate the return of football to Karajarri country at Bidyadanga, around a two-hour drive south of Broome.

“I’m welcoming the Cable Beach mob to play in my country,” she said.

“What we’re doing is getting the scent of the grass so that people can have that smell and be safe.

“This is our first home game after the COVID … it feels good.”

In the Kimberley — a region where Australian rules football is often likened to religion — the ability to host home games again has breathed life back into communities that have been largely closed off to the world.

Women’s coach Michael Martin said the return of home games brought the whole community together after a long period of uncertainty.

“Football is always number one on the calendar,” he said.

“It’s just given people a chance to forget about all that [COVID-19] and come down and support their team and have fun.

“It’s also an opportunity for men and women now to represent their communities.”

The restrictions, which were imposed by the state government, had required visitors to secure police approvals to enter more than 200 communities between the Goldfields and the Kimberley.

While state-level restrictions have eased, individual communities can still choose to apply their own restrictions about who can enter and why.

Mick Albert from the Cable Beach Greenbacks said his side was happy to make the last-minute trip from Broome, as teams in the West Kimberley Football League reverted to pre-pandemic fixtures.

“We had to scramble now the community has opened up during the week,” he said.

“We were still unsure if we were coming down to play.

“We had to check who had cars and who had spots available and do RAT tests as well.”

More than a game

Community nurse Latham Rogers took it upon himself to pick up elders from around the community and bring them to the oval to ensure they didn’t miss the big match.

“We’re making sure we are looking after the oldies in the community, bringing them down and letting them be part of the atmosphere, watching the young people play sport,” he says.

“Often the oldies wouldn’t have the opportunity to come down to watch the games and would stay at home.”

Mr Rogers prepared plates of fresh healthy food and served tea and coffee to elders throughout the game.

“Whether it’s a barbecue, sandwiches, fresh fruit, baking, we provide all of that here,” he said.

“That’s just part of our goodwill to the community.

“It’s also an opportunity to talk to our older community about making sure their vaccinations are up to date, whether they’ve had COVID, so it’s a bit of a health talk as well.”

Elder Joseph Munroe, who once played for the Bidyadanga men’s side, enjoyed a sandwich as he watched the game from a fold-out chair under the shade of a tree.

“It [the team] is … the heart and soul for years, always will be, always was,” he said.

Mr Munroe was pleased to be back cheering from the sidelines on home soil after so many away games he couldn’t attend during the pandemic.

“It was really hard for us not to travel to Broome, staying here in Bidyi, I was waiting until this COVID-19 went away to watch them play here on their home ground and in Broome,” he said.

ABC Kimberley will deliver a wrap of the week’s news, stories and photos every Tuesday. Sign up to stay connected.