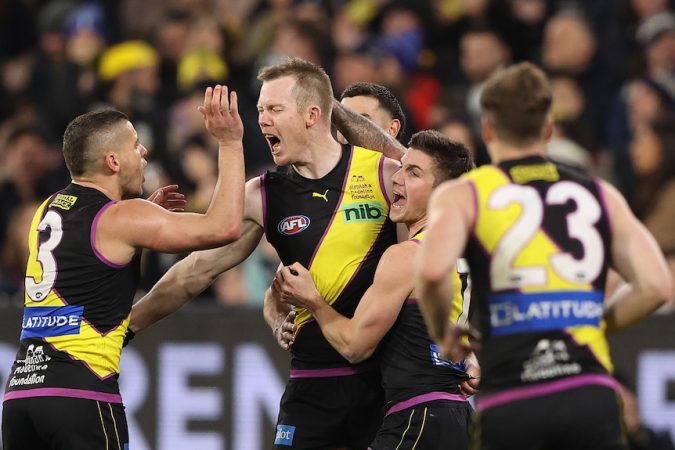 It was a week of upsets and top-eight movement, setting the table for the home stretch of an enthralling season.

Welcome to the Round-Up, where we digest the week that was.

Chaos in the finals race

Of all of the three bye weeks, this one felt the most bye week-ish. The big dogs at the top of the ladder had a week off, so attentions were turned a little lower down.

Luckily the goings on down there — and by that we mean from about fourth to 12th — is pretty compelling. In fact we’ve got one of the craziest finals races in recent memory brewing here.

The big movers this week were Richmond, whose win over Carlton both went some way to re-establishing the old order and brought the Tigers back into flag consideration.

Such is the evenness of this season across the board, Richmond’s experience on the biggest stage and in the biggest games will become an asset.

The same could be said for Geelong, who have once again quietly been sucked in by the gravitational pull of the top four.

We’ve said all year there is likely to be one vacant spot in the top four and any number of teams capable of taking it. Right now, the smart money would be on one of Geelong or Richmond making it their own by the end of the season.

Perhaps that is overreacting to one round, but it’s hard to get too hyped about Sydney or St Kilda after their massively disappointing showings this weekend.

Both were smacked by teams well below them on the ladder, mustering little fight and showing little resolve once their attacking instincts were headed off.

The Swans in particular have been wildly unpredictable this year, their best just about untouchable and their worst barely worth registering.

Collingwood, Gold Coast and the Western Bulldogs are lurking just outside that top eight now. Sporadic brilliance might not be enough to cut it in the race for the eight this year.

The best is right ahead of us

We normally try not to get too ahead of ourselves in the Round-Up, but it’s hard not to look at next week and not get excited.

It’s as if these three bye weeks were all just to set us up for round 15, when the 2022 season moves into its glorious home stretch with everything still up for grabs.

Check out these fixtures:

It’s probably good that Richmond publicly told Shai Bolton off for his showboating, but internally I hope they were far less critical. He is a special player whose flair and showmanship should be protected at all costs.

West Coast produced their best performance of the year this week, and Geelong one of their more timid. In a weird win-win, the Eagles would have been happy with their intent and performance and the Cats simply happy to get out of there with the points.

We put a line through Port Adelaide last week here. Just when I thought I was out, they pull me back in. As long as there is a mathematical chance, any team with those key-position weapons can’t be completely discounted.

It was hard to know where to look during the Giants’ and Bulldogs’ 80s throwback game, but it was very easy to know where not to look. Cody Weightman’s elbow. Returning to play after that might go some way to killing off some of the chatter around the young gun and “the way he goes about it”.

Good for Essendon. It would have been pretty easy to shut up shop in the third quarter after St Kilda basically erased the deficit in about five minutes, but to find the willingness to go again shows there is still something about this team. The Dons can really underline the point with a win over West Coast next week.

Wil Powell’s injury was the sort of one that can rattle teammates so thoroughly they struggle to see out the game. The Suns couldn’t afford that and did well to finish the job. But holy cannoli, poor Wil Powell.

A slow week in the Rising Star race with many of the frontrunners sitting out, but Nic Martin gave a timely reminder of his credentials.

We’ve still got Nick Daicos in front for now, but it’s going to be genuinely exciting to see which of the chief contenders — Daicos, Martin, Jai Newcombe and Sam De Koning — run away with this thing.

Sam Draper can take home mark of the week honours with this solid entry. Not nearly enough to trouble Cam Zuurhar’s lead though.

Slim pickings on the goal front his week too, so we’ll chuck it to Jack Billings for this one from the same game. Ed Langon’s grip on the GOTY title remains.