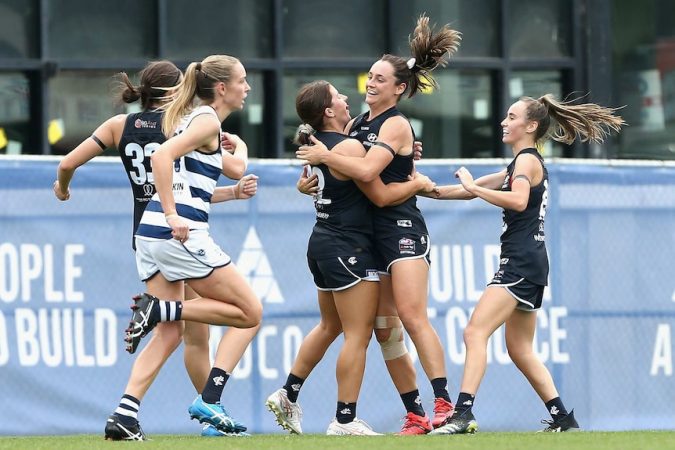 When the AFLW started, the season was seven rounds long. It’s since grown to 10 but is still half the length of the men’s.

Some would say that’s a good thing for players who are part-time and juggling other careers.

But it’s a challenge in more ways than one.

There are teething periods, injuries that put players out for most of the season, team connections to build and getting game plans right.

For Nicola Stevens, Carlton AFLW player and AFL Players Association representative, the shorter seasons mean sides aren’t getting to their potential before the competition ends.

“Only being able to play 10 rounds and three finals makes it really hard to build that momentum throughout the season,” she said.

“I think it’s really hard for teams to be able to find that groove and I don’t think we are seeing players and teams perform at their best.

“If we’re seeing the best parts of them, [it’s] at the back end of the season.”

This is something she knows well, as her side was touted as a flag favourite going into the 2021 season but had a slow start, banking 3 losses to 2 wins in the opening 5 rounds.

The Blues then began to find their rhythm in the back half of the year, but by then it was too late.

They finished seventh on the ladder, one spot out of finals.

“You can’t really afford to lose any matches as it compromises that chance of finals really early on,” she said.

“I think it’s a little bit different now that we’re able to play a few extra games than in 2017.

“If you’ve lost the first three in a row, then it makes it really, really difficult to play finals and to know that very early on in the season is really hard.”

No time for teething periods

“There isn’t that ability and that time to kind of get your forwards gelling or get your structure down pat,” she said.

“So, there’s like that pressure cooker feeling to get things right straight away. I think that’s deeply felt from both players and the coaches”.

“You really have to get your preseason right with what you’re going to do from a game plan point of view because it is extremely difficult to change it mid-season,” Trent Cooper, head coach for AFLW Fremantle said.

“We probably found that in 2021, where we got to the point with where we’re going, [I thought] ‘Well, actually sides have now worked us out’.

“But by that stage, you’re a week out from finals and you can’t change a game plan properly at that stage.

“So, you have to make sure you’ve trained a couple of different ways of playing in the preseason so that you have those ready to go.”

Cooper also notes that he’d be more willing to try different things out from a technical point of view, including player rotation.

Ironically, he says that the COVID-disrupted fixture changes have meant the team have been rotating more players through matches due to short turnover times, but this is something that longer seasons would normally allow.

“We’re playing what’s going to be four games in 15 days that we’re rotating the squad through, so, that sort of forces that [player rotation],” Cooper says.

“But if you had a longer season, I think you’d look at doing that as well.”

This would mean that younger players would get more match experience, which is important for developing their football and contributing to the team.

“‘I’ve got no doubt there’s been selection headaches where people have chosen someone because they know what they can get from them, rather than taking a risk on a player that is a little bit more unknown,” Hickey said.

Injuries can be season-defining

Another particular concern with the short competitions is that any injury can mean players miss a significant chunk, if not all, of the season.

Cooper says that an injury in the men’s season that might mean a player misses a third of the year can be season-ending in the women’s competition.

For example, Fremantle’s Janelle Cuthbertson recently suffered a fractured jaw at training, which will sideline her for six weeks – a majority of the season.

“It’s disappointing for those girls who get an injury that’s maybe not a super serious one, but it actually means that they’re missing a huge part of the season or whole season.

“So, we had Aine Tighe, who did an ACL in the first year and missed a season. But then the next year, she had a knee injury that wasn’t as bad but she still missed the whole year because of it. So, that’s a challenge”

Additionally, Stevens says it “hits us even harder” with players out with the health and safety protocols in the COVID-complicated 2022 competition.

“Or even if players are injured, and with matches being postponed and games being played midweek, it means that some players actually miss more than one game of the 10-round season, which makes it really difficult to be playing your best group of 21 throughout the whole season,” she says.

Although a longer season would help a lot of current challenges, Cooper stresses the need to go slow, as a big leap could hinder the progression of the game.

While players have other work commitments outside of football, he warns the quality of football “would fall off the edge of a cliff”.

“The quality of the footy between the good sides does get better towards the end of the season,” he said.

“[But] fatigue with non-full-time professional athletes is a real thing, so at the moment I think performance could wane if we have too many games”

To counter this, he says, the players would need the ability to focus primarily on their footy, which would come with full-time athlete status.

That focus, aided by longer seasons and preseasons, many acknowledge would be good for the game. Stevens is one of them.

“I think if we had a longer season, it would take the pressure out of the game a little bit and pressure to perform,” she says.

“And it’ll allow girls to settle into the game and contribute at the highest level possible.

“I think the longer season will allow us to see players play at their full potential and teams really build that connection and chemistry in the back half of the season and allow for those peaks and troughs throughout.”

ABC Sport is partnering with Siren Sport to elevate the coverage of Australian women in sport.

Marnie Vinall is a Melbourne-based lifestyle and sports writer and broadcaster.