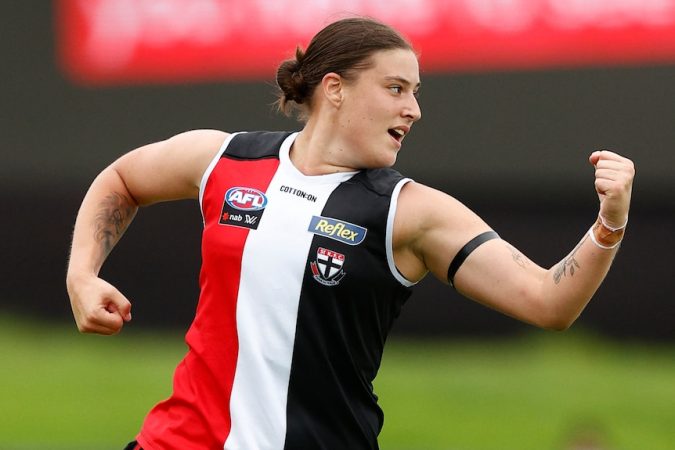 Daisy Pearce kicked five goals as Melbourne produced a record-breaking 88-point AFLW win against a depleted Fremantle line-up in Perth to jump to the top of the ladder.

The Demons showed no mercy against the Dockers, who were missing a host of players, including reigning AFLW best-and-fairest winner Kiara Bowers (knee) and Gabby O’Sullivan (COVID-19 protocols).

Melbourne capitalised on its good fortune as it broke the record for the largest AFLW score — set last week by the Brisbane Lions — along with the largest margin in league history, triumphing 16.11 (107) to 3.1 (19).

The Demons’ third term, kicking 7.1 without reply, was the best quarter in the competition’s history.

The match was crucial in the race for the top two but the weakened Dockers — forced to field three debutants — were no match for Melbourne, who excelled with its kick-mark style.

The percentage-boosting win not only firmed up a top-two berth for the Demons but offered hope of finishing above Adelaide in the race for the minor premiership.

Along with Pearce, Lily Mithen (25 disposals) and Kate Hore (16 disposals and three goals) starred on Saturday.

Despite their list of absentees, the Dockers kicked the first goal of the match from Makaela Tuhakaraina, but the Demons quickly settled and exerted control.

Pearce, Tayla Harris and Hore responded with first-quarter majors, while Fremantle was further decimated after a concussion ruled Matilda Sargeant out of the match.

The Demons opened up a 34-point half-time lead before their dominant third quarter where the ball appeared almost exclusively inside their attacking 50, with Pearce kicking three majors for the term.

Richmond outclassed a plucky GWS at Giants Stadium, with a first-quarter onslaught setting up an eight-point win.

The visitors sealed a 7.4 (46) to 6.2 (38) victory despite the best efforts of GWS veteran Cora Staunton, who kicked three brilliant final-quarter goals as her side ultimately fell short.

The Tigers were totally dominant in the opening term, moving the ball with ease, tackling fiercely and piling on five unanswered goals to record their highest first-quarter score.

The Giants could do little to halt the Tigers, with Courtney Wakefield and Maddie Shevlin kicking classy goals from opposite forward pockets and captain Katie Brennan extending her run of scoring at least one goal per game to 15 consecutive matches.

With Meagan Kiely making the most of a free kick in front of goal and Tessa Lavey bouncing through a long-range goal on the quarter-time siren, the game looked all but over at the first break.

But the Giants fought back gallantly and were able to stem the flow in the second quarter, putting the Tigers under pressure with repeat inside 50 entries before Emily Pease broke through for GWS’s first goal.

Defender Brid Stack followed up with a goal of her own, sneaking forward and roving a pack beautifully to keep the Giants in touch.

The Giants may have made more of their second-quarter momentum were it not for Richmond defender Rebecca Miller — who cut off a number of forward thrusts with strong intercept marks and timely spoils — and Monique Conti, who finished with 26 disposals in a dominant midfield display.

Richmond stretched the margin beyond 30 points in the third term, courtesy of goals to Christina Bernardi and Katie Brennan, as both teams fought desperately to claim a rare 2022 win.

Four final-quarter Giants goals — three from Staunton and one from Rebecca Privitelli — made sure the Tigers were forced to fight until the final siren.

The Giants are almost certain to be without star Alyce Parker for their final match of the season, with the gun midfielder suffering a concussion in a head clash with the Tigers’ Sarah Hosking.