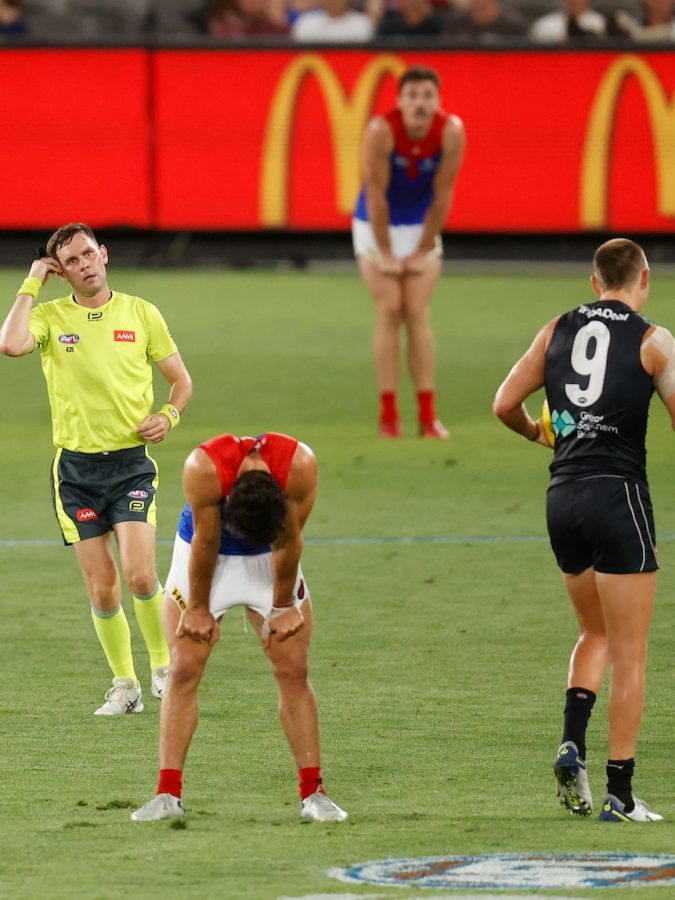 We’re a couple of days away from the new AFL season and everyone from teams to fans and pundits are getting pretty excited for the start of proceedings.

As seems often the case in recent years, the new season brings a handful of changes to rules or new interpretations to the game.

But how big are this year’s changes, and what impact can we expect them to have on premiership matches once the season proper gets underway?

There are two main rules that the AFL have announced changes in interpretation — holding the ball and time delay.

According to the AFL, umpires will be less lenient towards players who have had prior opportunity and do not immediately and correctly dispose of the football when tackled.

Free kicks will be awarded against players who duck their heads prior to being tackled and do not dispose of the ball correctly.

Some of the red flags for umpires will include players evading, fending, ducking, having a prior option and not taking it, being balanced and steady, or driving their head.

It’s hard to get a grip on how big this one will be.

In the AFL Community Series preseason games, it appeared that umpires were paying closer attention and there were plenty of frees paid for holding the ball — particularly where players tried to get the ball away but could not manage to correctly dispose of it.

However, there was still a fair number of cases across various games where it could be argued that leniency was shown.

Clearly, the intensity of play can be expected to ratchet up further once round one begins and premiership points are on offer.

The test will be whether the umpires hold to a stricter standard for the first couple of rounds and then relax, or whether the edict will be followed for the full season.

The AFL says umpires will be less lenient towards players who deliberately delay the play, with frees or 50-metre penalties being paid.

One example of delaying the play came in the Richmond–Hawthorn game during the Community Series, where the Tigers’ Dion Prestia knocked the ball out of the hands of a Hawks player after he had taken a mark.

Rather than being given a warning, as might have happened previously, Prestia received a 50-metre penalty straight away.

This of course was for a time delay in the general run of play. Time wasting, which normally applies in the final minutes of halves and games when teams want to run the clock down, is a separate matter.

Umpires are also being told to be less lenient with time wasting — the penalty for this is a free kick, not a 50, but if the infringement comes close to goal, such as taking too long with a kick-in, it could have an impact.

The other big move comes not to change the game itself but rather the spirit in which the game is played.

The AFL has written to the clubs to tell them about a crackdown on umpire abuse — with a range of actions by players potentially attracting a free or 50-metre penalty.

“The important thing is that we really want players to understand that umpires will get most decisions right but they will get some wrong, and we want players to get on with the game — they have a responsibility to all levels of football to do that.

The reference to “all levels of football” is telling — this decision has an AFL-wide impact.

Some AFL junior clubs have already begun telling their players — and parents — ahead of junior football seasons that the crackdown on player behaviour toward umpires affects them as well.

I witnessed one such message in person on the weekend.

Anything which potentially reduces the level of abuse, aggression or challenging behaviour faced by umpires who are trying to do their job is a good thing.

It’s not suggesting that umpires are under threat in any way in games in the AFL, but a reminder that the action is viewed by most people who play the game, including those of a young, impressionable age — and that setting a good example is more important than pushing it and conceding a 50-metre penalty.

Following the edict, there were five 50-metres penalties handed out in the remaining preseason games — and three of those came in the Melbourne–Carlton game.

It’s unlikely to play a huge part in the season proper once players get used to this — but it could be interesting if someone loses their cool at a key moment in an important game. Watch this space.