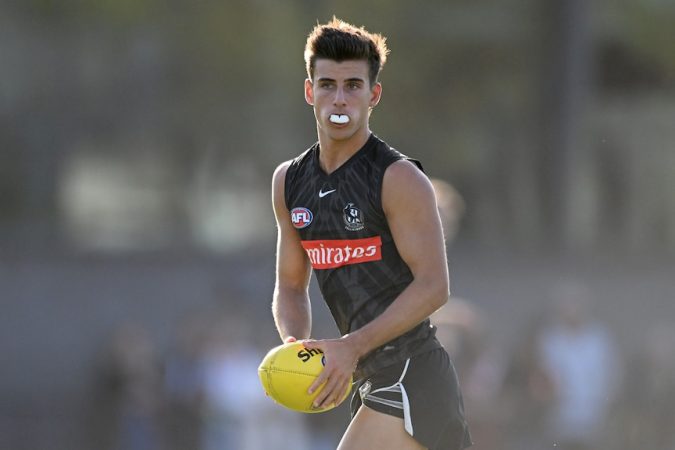 Having ticked off months of gruelling fitness work, behind-the-scenes tactical alterations and intra-club hit-outs, preseason for our male AFL players is about the reach the next step.

We’re not at the stage yet for the fully AFL-sanctioned preseason games — they come next week — but we do have the AFL-scheduled practice games to look forward to.

The AFL says these games, which begin on Wednesday afternoon, will see “teams decide on the format of each game including number of players, number of quarters and quarter length”.

But for the sake of argument, and because all of these matches will be broadcast live on Kayo Sports, we are counting this as the official start of preseason action.

And there’s plenty to be on the lookout for.

Word on the grapevine is the 2021 draft class have been burning up tracks, training houses down and running on top of grounds all summer. The usual, then.

But it does sound like we can expect to see a fair few draftees in round one contention across the comp, and these praccy matches will give the wider public first exposure to them.

You can pretty safely lock in both Jason Horne-Francis and Nick Daicos for round one and should definitely find some time in your week to catch them in their North and Pies colours for the first time. These are special players you will want to be able to say you saw play in their first preseason games.

Elsewhere, round one debuts are up for grabs for Josh Sinn at Port Adelaide, Ben Hobbs at Essendon, Josh Ward at Hawthorn, Campbell Chesser at West Coast, Josh Rachele at Adelaide and Neil Erasmus at Fremantle.

Whether or not any or all of those are thrown straight in the deep end may come down to performances in these preseason games.

Mixing up some positions

Every preseason, we see established players chucked into new positions and very rarely do those moves stick around for long in the season proper.

But who knows! Could future-All Australian half-back Jack Lukosius actually make a permanent switch to the forward line? Could Tom Barrass, who has never kicked a goal in his 99 AFL games, replace Jack Darling at centre-half-forward?

Then there are the midfield movers. Word out of Brisbane is Brownlow medallist Lachie Neale will be shuffled around to make room for Cam Rayner and Zac Bailey in the middle. Zac Butters and Connor Rozee are also both set for more midfield time at Port Adelaide.

But this is what preseason is for. If you’re not trying things at this point in the year, you’re wasting your time. Here’s to a Lukosius-Barrass Coleman race in 2022.

Three of the “big” Victorian teams are coming into season 2022 with new men at the helm, each bringing with them no shortage of optimism for a better future.

Sam Mitchell’s first season at Hawthorn will be particularly interesting. The sequence of events that led to Alastair Clarkson’s swift exit and Mitchell’s appointment means the incumbent will not receive the usual grace period a rookie coach would expect.

Mitchell is a gifted footy thinker and in time will be a successful coach, but this opening salvo, even in preseason, will be fascinating.

Michael Voss’s return to the hot seat with Carlton is another story to follow, while Craig McRae will have the luxury of starting his career in a slightly dimmed spotlight compared to the other two — if that’s possible at Collingwood.

No sound judgement on these coaches or teams will be possible from a couple of practice games, but fans will be expecting to see signs of altered game plans.

When are the AFL preseason games?