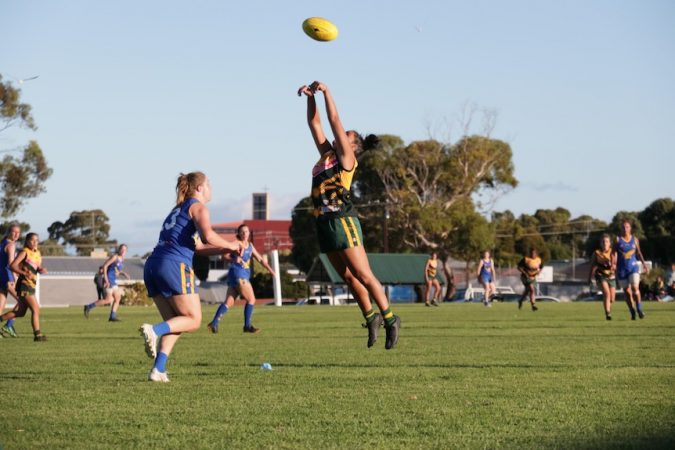 On the team sheet for a footy match in Port Lincoln last week were some big names — Johncock, Miller, Wells, Betts and Burgoyne.

But these were not the Indigenous stars of the AFL but debutantes to the code — and they were all women.

The first women’s competition in the South Australian town has just wrapped up with the region attracting five clubs, including the Mallee Park Football Club.

Mallee Park captain Shenae Miller is related to those aforementioned big names and says playing football for her club is a dream come true.

“The only sport I’ve ever wanted to play is football, so for all of us to be able to play and play for the club we love is pretty special,” Ms Miller says.

“Our dads, uncles, family who have made AFL have all played at this club.”

Ms Miller hopes the competition can provide a gateway into the national AFLW tournament for players.

“I would love to see one of our girls up there in the AFL,” she says.

“Coming from Adelaide, the girls over there are so advanced in football so if we can start them off here, move them over to Adelaide early, they’ve got the skill, the talent, we’ve just got to get them that head start.”

With his daughter Felicity playing in the Under 16 competition, he is one of the club’s biggest supporters.

“Not only Mallee Park, but all the football clubs in Port Lincoln have done a fantastic job to get the teams up and growing,” Mr Johncock says.

“I think the competition has been fantastic for the community. It’s brought a lot of enthusiasm and excitement.”

Mr Johncock hopes to see females who are just starting out hone their skills to move up to the bigger leagues.

“It’s only going to grow and get bigger and better, and if our girls continue to put the hard work in, then hopefully we will see a couple follow in the footsteps of our male counterparts,” he says.

“Growing up with football, watching your dads and brothers playing, you’re always itching to play so it’s a bonus to play with family [like] your sisters, your aunties,” Ms Wells says.

“It’s deadly to play for Mallee Park because this is our family community club.

“My uncle [Daniel Wells] played AFL for a couple of years, he played for North Melbourne then went to Collingwood.

“His name is up there, my Pop played here, he started the whole Wells name.

Mallee Park came third in the competition, but the girls say playing the sport is about more than winning.

Antoinette Clifford says it was empowering to be out on the field.

“Not only are they out here being active and being a part of the club, they’re also being role models for the families, doing physical activity, being involved in the football side of things,” Ms Clifford says.

She plays with her daughter and looked forward to encouraging her in the sport.

While the season has just wrapped up, this is just the beginning for Mallee Park and the other female football teams playing in Port Lincoln.