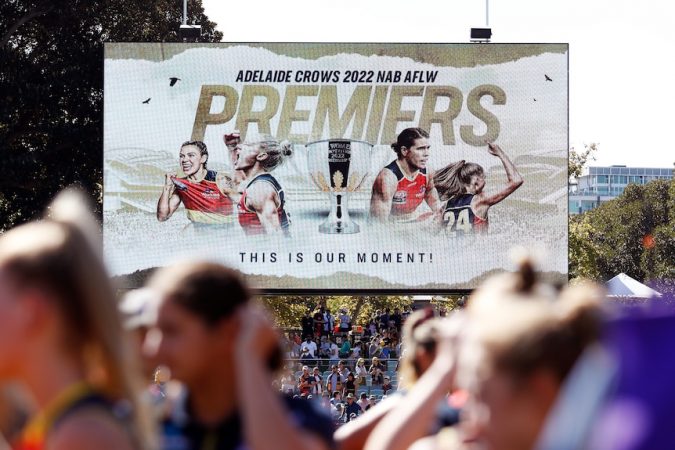 On the ABC’s AFLW podcast, The W with Sharni and Sam, we’ve spent the last 15 weeks talking to the leading players, coaches and administrators.

These are the five biggest issues that were brought up by the league’s central figures.

Full-time status: when and how?

The AFL’s assertion that the league will become full-time by 2026 is the official line on the “when” part of that question, but how we get to that point was brought up by a number of figures this season.

Collingwood’s Brianna Davey talked about the need to adequately support players during that transition to full-time status.

“The transition period, I think, will probably be the hardest bit,” Davey said.

“When the girls are expected to, sort of, half-work, half-do footy.

“I do think it’s achievable, but the support needs to be in place for the girls, particularly, who aren’t earning enough to just play footy.”

“You do get a couple of weeks off after the season, but then the work starts again, and you feel like you’re volunteering for the AFL for five months.”

“I think we can become full-time anytime we want,” Lee said.

“I think it’s just: How does it work and what’s the decision … and how do we fund it?”

The full-time question wasn’t just being posed by players, but by coaches too, as inaugural Sydney Swans AFLW head coach Scott Gowans made clear.

“What the hell’s going to happen when they become full-time [players] and there’s one full-time coach in the program?” Gowans asked.

“Unless the coaches association or the AFL are going to help and support enough coaches in the program to coach the athletes full time and make it worthwhile, nobody is going to do it for $10 to $20 an hour.”

Full-fixture season: When and how?

The fact every team doesn’t face every other team in an AFLW season — and what that means for the integrity of the competition — was brought up by a number of players this season, including Vescio.

“I would just love to see a competition where we play every team,” Vescio said.

“I haven’t played West Coast yet, so I would love to play West Coast.”

AFL Players Association chief executive Paul Marsh said he saw that happening in 2026, although that could only be done in increments.

“There’s a pathway to that,” Marsh said.

“You could make one big jump in 2026, or you could do it incrementally.

“I think we favour incremental growth, giving the players the ability to work up to an increased number of games.”

Geelong AFL Men’s star Patrick Dangerfield, who is the current president of the AFLPA, also indicated that a full-fixture season was down on his list of priorities ahead of the next collective bargaining agreement negotiations.

“I get that everyone loves footy, and you want to play as much as you possibly can,” Dangerfield said.

“But what we’ve seen with the Big Bash League is the more games, it’s resulted in less interest.

“So I’d structure it more. How do we pay the girls for what they do, and then build out the game after that.”

Fast-tracking a pay rise for AFLW players was another hot topic, as was whether male players should have to share their 28 per cent revenue cut.

Brisbane Lions AFLW coach Craig Starcevich was the first to raise the idea.

“I see a lot of the boy’s representatives on the PA talk about their support for women’s footy, and that’s brilliant,” Starcevich said.

“However, the crunch is going to come when the next collective bargaining agreement comes up: How much of the pie are you prepared to give up to fast track women becoming full-time professionals?”

This idea was reiterated by Vescio.

“If you’ve had all the resources, all the money, all the opportunity, for all of the years: Is that really yours?” Vescio asked.

“I think there’s quite a strong argument that there should be some redistribution.”

However, Dangerfield said, while securing a pay rise for AFLW players was his top priority, it wasn’t necessary to eat into the men’s share to achieve that.

“I still think there’s enough of the pie to make meaningful change without having to withdraw it from part of the playing cohort,” he said.

Many contributors gave us a clear view into the day-to-day obstacles AFLW players have to negotiate as a matter of course, one of which was the limited access they have to club facilities and resources.

The lack of medical support staff was illustrated by Adelaide superstar Erin Phillips.

“Medical comes under the soft cap, which is crazy,” Phillips said.

“It should be something completely separate, to be able to spend as much as you can, getting more than just a 30-minute massage a week for free from the club.

“We have one physio for 31 girls … It’s a line like a COVID test … if you cut corners on these things, to me, you’re going to get things like ACLs and injuries, and girls not physically ready to perform.”

“Other AFLW players, they have actually outsourced, found someone themselves rather than going through the club because they wanted to get the best support for their knee and they didn’t feel like they were getting that at their club,” Hill said.

The timing of when the season starts was another point of discussion, with a wide variety of views among the playing cohort — it seems this question has been answered by the AFL, with the next AFLW season set to start in August this year.

The January start this past season, however, was not well-liked by some, including Erin Phillips.

“I’d love to see the season start in October, just after the men’s competition finishes.”

Debbie Lee liked playing in the summer, but with one stipulation.

“I love the game in summer, I think it’s great,” Lee said.

“What I don’t think works is the break across Christmas.”

But, really, the overwhelming impression the players gave was one of a desire for certainty.

“To be honest, I don’t mind when it is,” Melbourne Demons’ star Kate Hore said.

“I would just like to see it locked in, because I think the fact it changes around every year, it’s just hard to plan your life.”