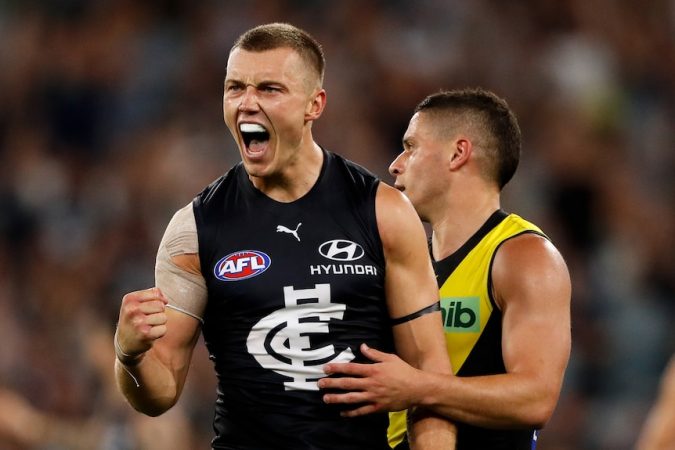 A Sydney derby for the ages, the emergence of some unlikely cult heroes and a season-opening win for Carlton, of all things — round one of the 2022 AFL season had something for everyone.

Momentum is the magic word

Almost every game this week seemed to move like Newton’s cradle, with teams taking turns to go on searing hot streaks of goals.

It was partially a by-product of the annual free-for-all that is round one, when delusions of grandeur mean that all 18 teams attempt to play free-flowing, attacking footy. For most sides, that normally lasts about a fortnight before conservatism takes over again.

But it also has to be a result of what Melbourne did in 2021. It’s too simplistic to look at what the Dees did in the third quarter of the grand final and say, “Hey, let’s do that”, but it would also be pretty dumb to not learn something from it.

The game is now designed to promote that sort of footy, with the 6-6-6 and stand rules making it easier than ever for teams to catch fire.

What will now separate the best teams from the battlers is the ability to withstand the opposition’s periods of momentum and turn their own into sustained field position and repeat entries.

Both are dependent on team defence and structures behind the ball. The boring bit makes the thrilling bit possible. It’s why the Dees are the best team in the league — they are the masters at both of these aspects, and were again on Wednesday night.

Carlton might have been the story of round one. Their breakthrough win over Richmond was even more dominant than the scoreboard indicated, and came on the back of a stellar midfield showing.

Cripps is fit and frightening, Kennedy, at last, looked the player scouts thought they saw before he was drafted, and Cerra’s arrival adds immense class to complement the grunt. It sounds like Walsh is ahead of schedule on his return, too.

The defensive restructuring promised by Michael Voss was evident on Thursday night, which should allow those mids to make their presence felt forward more consistently. It’s early, but it appears a sustainable recipe.

Meanwhile, in Sydney, the development of a few younger mids has allowed some veterans to be repurposed into game-breakers at either end.

Ollie Florent is noticeably bigger across the chest and shoulders, and was brilliant against the Giants.

The result? Luke Parker can spend time forward and kicks a bag. Josh Kennedy can play at half-back and add strength and experience behind the play.

Simon Goodwin has previously said he would play midfielders all over the ground if he could. Sydney seem to be following suit.

That first quarter from Patrick Dangerfield at the MCG was flatly ridiculous.

He had 13 disposals and six inside-50s to the first change, and topped 400 metres gained within a few minutes of the second term.

Danger eased off from there, having blown Essendon out of the water within half an hour, but that burst of brilliance was a reminder of what he’s capable of, and a peek at what a more-forward-thinking Cats could get out of him.

For Essendon, the lack of fight was striking. There were 77 tackles in this game in total — for reference there were 124 in the Sydney derby a couple of hours later. The Dons let it become an open game, and were walked through without a fight.

Gets his own section.

Unless you were watching, it’s hard to describe how done the Crows were at half-time and how absolutely, unequivocally done the Dockers were halfway through the last quarter.

Adelaide’s comeback was stirring, but the Dockers’ ability to throw one more decisive punch was something else.

It was summed up by Chapman’s Gordon Banks impression at the death, when anything other than a perfect defensive effort would cost his team points.

Freo are capable of much better four-quarter efforts, but there’s no telling how valuable this win by a whisker will prove to be.

Sam Mitchell will be one of the stories of 2022, no matter how Hawthorn’s season goes. There were shades of Ted Lasso in the whole-club team song and the unshackling of Chad Wingard’s long sleeves, but it may be just what the Hawks need.

We’re still surprised every time a mature-age player from a state league arrives and makes an immediate impact.

This week it was St Kilda’s Jack Hayes and Essendon’s Nic Martin. There will be more this year, and if list managers are awake to the possibilities, more than ever in the years to come.

After the sugar rush of the Sydney derby, the first quarter of Brisbane-Port Adelaide was a hell of a comedown. The game opened up and became more watchable, but a game of errors. That Brisbane could find a way to win a dodgy one reflects well on their flag credentials.

The chucked-together Eagles gave a decent account of themselves on Sunday evening, but there was a clear gulf in midfield class and the brilliance of Matt Rowell and Touk Miller put the game away. Better teams than the Eagles will struggle with those two as the season goes on.

Here we take stock of who is leading the race for the season’s individual awards (according to, you know, some guy).

Poor old Nic Martin probably thought he had things sewn up, with 27 touches and five goals on Saturday, only for Josh Rachele to turn up and make things interesting.

Both kicked five goals each, and Martin won more of the footy around the ground. But Rachele’s five goals and 14 disposals were absolutely critical in Adelaide’s stirring comeback against Fremantle, and was nearly enough to get them the win.

We’re all about context here, so this gifted young Crow gets the nod.

Joe Daniher’s mark at the Gabba was the best of the week. What followed is also leading the race for dumbest moment of the year too, and will take some beating.

And Michael Frederick’s volley into the top corner at Adelaide Oval was our goal of the week. Not sure he meant the first three fumbles, but there was no disputing his intentions once he wrapped his boot around it.