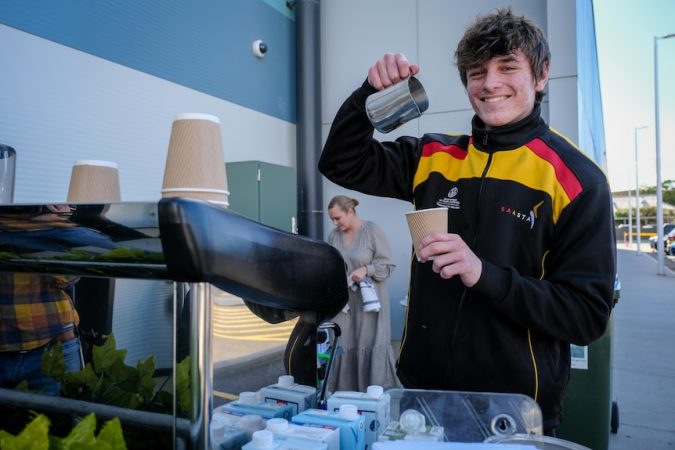 A South Australian program, aimed at getting Aboriginal students on a career path, has expanded its efforts to help close the gap.

The South Australian Aboriginal Secondary Training Academy (SAASTA) is working with the Workabout Centre to give 550 Aboriginal students across the state the opportunity to find meaningful employment, while encouraging them to finish high school.

In its second year, the Aboriginal Career Exploration program (ACE) has grown by 400 students with 60 stalls and service providers taking part in this year.

Regional coordinator for the Workabout Centre, Isaiah Omamogho, said the program’s targeted approach made it different to standard career expos.

“We want to basically expose them and immerse them in as many industries and pathways as possible so that they can go back to their school and have an informed decision on what subjects they need to do,” Mr Omamogho said.

Stallholders are given tips on how to engage with students and focus on providing plans for both short-term and long-term employment to ensure their pathways are achievable.

“We’ve had a lot of anecdotal evidence of students having an idea of the careers they are interested in,” Mr Omamogho said.

“But for some, by the end of the program it was something different just because they realised their skill sets and abilities were suited to a different industry, which is great for us to see.”

The program coincides with the 15th annual Aboriginal Power Cup, where students play the final game at Adelaide Oval before Port Adelaide’s match against Essendon this Sunday.

Students need a minimum 80 per cent school attendance to participate in the sports carnival.

From a young age, Bailey always loved to cook.

“When I was three my mum would put me up on the countertop and let me crack the eggs into the cake mix,” he said.

“Most of the time there would be egg shells inside the mix, but that was okay.”

The year 12 student took part in the first career expo and is now working at a restaurant while he completes his chef apprenticeship.

“I want to eventually own my own restaurant,” Bailey said.

“I was kind of tossing up a few things like metal work, being a paramedic, but ACE helped me realise I’m meant to be a chef.”

Gemma is a hands-on year 11 student who wants to turn that skill into a future job.

“They gave us a bit of a taste-tester so we did a bit of bricklaying, bit of carpentry and tiling and after that I just knew it was for me,” she said.

But her career aspirations do not stop there — she also hopes to become a teacher one day.

“I’ve got two career options either teaching or carpentry and they said to do both and said they will support me with that too, so it’s pretty good to know that I have that support,” Gemma said.

Gemma said her attitude to school had changed since being part of the SAASTA program.

“I’ve had so much support from the SAASTA teachers,” she said.

“They tell me I can do this, I can do that, like hopefully I’m going to finish year 12 so that’s the plan.”

Now she said there was no question whether she would achieve her goals.

Employment and a connection to culture

For Jacob, it was people from the Workabout Centre like Isaiah Omamogho who inspired him to build a greater connection with his culture.

“I’ve wanted to be an Aboriginal educational teacher — so teaching all the young mob what I have learnt so they grow up and know all the knowledge about where they are from and how to speak their language,” the year 10 student said.

The Ngarrindjeri and Wakka Wakka student said he had always been shy, but has since opened up after learning about his own culture.

“Growing up I didn’t really know where I was from, what my tribes were, or how to speak my language,” he said.

“They’ve helped me with my communication the most and they’ve definitely taught me to be the person I am.”

From taking part in the program, Jacob has secured a casual position at Kmart.

“During high school all these Workabout centres helped me get my first job and it’s all linking up now,” he said.

As well as aiming to keep kids in school, the Aboriginal Power Cup is hoping to help achieve similar stories to Jacob’s.

The program, held during the AFL’s Sir Doug Nicholls Round, aims to celebrate and recognise Aboriginal and Torres Strait Islander people and their contribution to Australian Football.

Port Adelaide midfielder, Sam-Powell-Pepper said he wished he had a program like it when he was growing up.

“At that age I wasn’t too sure about my culture as much as I wanted to be, but things like this will help kids understand where they are from.”

Students are also working on a choreographed cultural dance to perform in front of thousands of fans at Adelaide Oval this Sunday.