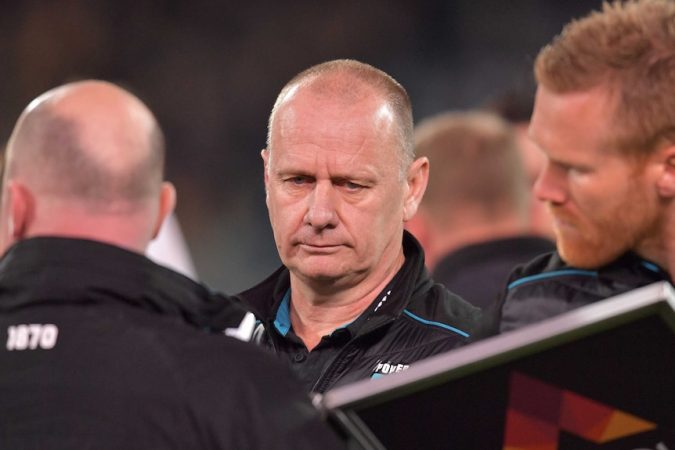 Port Adelaide captain Tom Jonas has backed under-fire coach Ken Hinkley, saying he doesn’t want to play under anyone else.

The Power has crashed to a 0-4 start to the AFL season after a 32-point thrashing at the hands of reigning premier Melbourne at Adelaide Oval last night.

“Obviously it was very disappointing to go down again,” Jonas told ABC Sport.

“One thing I can say about the group is it’s not fractured — we’re really sticking together and there’s no lack of effort.”

Port was held to its first-ever goalless half in the AFL, and only registered its first major 22 minutes into the third term.

“We wanted to defend with the ball in hand, make the ground big, and then go forward – but we probably didn’t get it quite right,” Jonas said.

“When you can’t get that scoreboard pressure it sometimes does have a bit of an impact – you want to be kicking goals and want to be playing fun, high-scoring footy and that wasn’t happening.”

But Jonas says players remain firmly behind their coach.

“You’re not going to hear anything different from me — I love Kenny and we’ve got a great relationship, as he does with a lot of the boys, ” he said

“We’ve got full trust in him and the rest of the coaching group.

“We all would have loved to win a premiership, don’t get me wrong, but we’ve played some pretty good footy the last couple of years. Of course we’ve fallen short and we’re struggling at the moment, but I don’t want to see it through with anyone else but Kenny.”

After the match, Hinkley was adamant his side could still make the finals.

“Why not? We haven’t had everything the way we’ve [liked to] have, but it’s a long season,” Hinkley said after the Power’s 32-point loss to Melbourne at Adelaide Oval on Thursday night.

“I get that people question my belief, but I’m strong in it — I think we can absolutely move forward and improve quickly.”

But to turn things around, the Power will need avoid offensive performances like the one they produced against the Demons.

“I never want to play in games of football where we don’t score goals … it’s not a title we want,” Hinkley said.

“No-one is more frustrated than us, and we understand the fans’ frustration because they want their team to be playing well.

“Our players and our coaching staff and our whole football club will stick together and work really hard to make sure we quickly get back on track somewhere close to what they would love us to be playing like.

“We’re desperate for it to turn around.

“I know it can be hard to accept, but we’re working towards making us better quickly and hanging in there.

“At the moment, we’re hanging in there in a position we’d much rather not be in.”