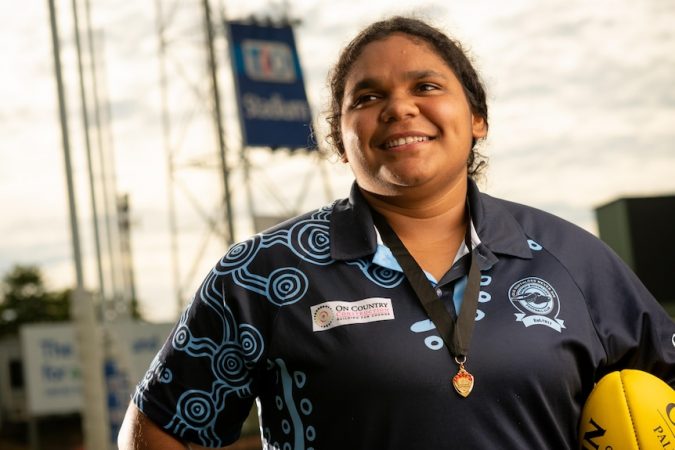 The Northern Territory Football League’s (NTFL) highest individual honours for the 2020/21 season have gone to three first-time winners in a nail-biting vote count on Sunday evening.

In the equivalent award in the Men’s Premier League, Eric Guthrie from the Palmerston Magpies and Daniel Bowles from the Nightcliff Tigers (14 votes) were joint winners of the Nichols Medal.

Other key winners on the night included Jackson Calder from St Mary’s (58 goals) and Lisa Miceli from Waratah (37 goals) who took out the leading goal kicker awards in the Men’s and Women’s Premier League respectively.

It is the second season in a row Miceli has won the award.

There were no crowds or speeches on the night, with the awards held virtually for the first time due to COVID-19.

Althouse, who will line up in the league’s women’s grand final this weekend, said winning the Gwynne Medal was both an honour and a surprise.

“Mum was crying. I really didn’t know what to think.”

“We went down in a grand final last year, so we’re seeking revenge,” she said.

“We’ve got [the Nightcliff] Tigers so hopefully we can do alright.”

Guthrie, a hard-nosed inside midfielder, became Palmerston’s first Nichols Medal winner since the club was known as North Darwin.

“Obviously winning games is good but at the end of the day it’s still a game and you play with your best mates and make some really good friendships through football,” Guthrie said after the count.

“I don’t think anyone expects to be standing and getting an award like this, but it’s obviously nice to be standing [here] and have it around your neck.”