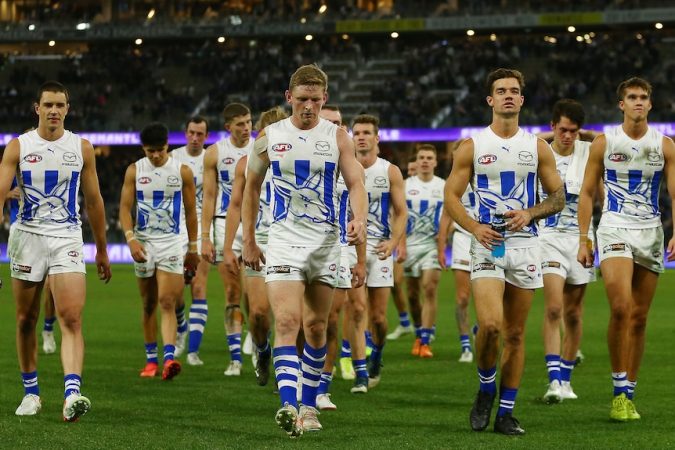 North Melbourne is putting up a “united” front, despite confirming its list manager quit his role this week because he did not feel supported.

Glenn Luff resigned on Tuesday, while long-time national recruiting manager Mark Finnigan and recruiting officer Ben Birthisel have also left the club, which is languishing in second-last place on the ladder with one win from 10 matches.

The exodus of the three recruiters comes on the eve of the mid-season draft.

Kangaroos chief executive Ben Amarfio said Luff had cited a lack of support as being behind his decision to depart from the club.

“I think there’s a number of reasons why Glenn left and that’s one of the many reasons,” Amarfio told a media conference at Arden Street on Thursday.

When asked why Luff felt unsupported, Amarfio said: “That’s a question for Glenn.”

ABC Sport has contacted Luff for comment but he is yet to respond.

“We were disappointed. We would have loved to have kept him,” Amarfio said.

Finnigan left the Kangaroos to move to Hawthorn, while Birthisel quit to take a permanent job in another industry.

“[Mark Finnigan] received a great offer and he received some security… that we couldn’t match,” Amarfio said.

The resignations leave football boss and former player Brady Rawlings and veteran recruiter Scott Clayton as the only members of the Kangaroos full-time recruiting staff.

“It’s not ideal to lose three recruiters at this time of the year but… the work for mid-season draft has been done in the past few months,” Amarfio said.

Amarfio said head coach David Noble, who is in his second season at the Kangaroos, had the support of every key stakeholder at Arden Street.

Amarfio admitted the Kangaroos were enduring a “tough trot”.

“In terms of where we thought we’d be at as a club, having looked at other successful rebuilds, this is what we expected,” Amarfio said.

“Are we frustrated? Absolutely. Would we like to be a little bit more competitive and our loss margins to be smaller? Absolutely.

“But we’re not surprised we’re in the position we’re in.”

Noble in for the ‘long haul’

Noble said Amarfio’s support was an indication the club remained strong and united.

“I took this job on understanding there will be difficult times,” he said.

“I’m here for the long haul. I want our club to be successful and strong.”

Noble called out what he labelled as misleading stories in the media.

He pointed to reports claiming he had “disturbing” relationships with players and that he had been directed to apologise to the playing squad after a post-match address following a humiliating loss to Brisbane earlier this season.

“I wish people would stop reporting them because they’re not true,” Noble said.

“I don’t know how many times I have to say that our players are engaged.

“For the last time, we are moving forward together, and yes, it’s challenging.”

Noble disagreed the departure of the three recruiters was a bad look, saying each person’s personal circumstances were different and that the situation could be worse.

Meanwhile, Amarfio invited Kangaroos greats Wayne Carey and David King down to the club to be “part of the solution” as it looks to improve its performances.

Carey and King — who were Kangaroos premiership teammates in 1996 and 1999 — have been among the club’s most vocal critics.