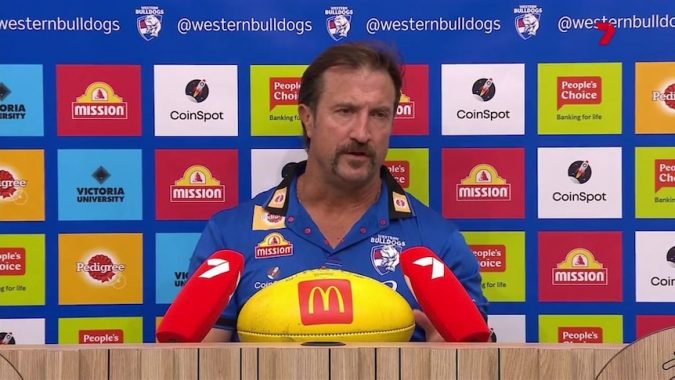 Fox Sports journalist Tom Morris has been stood down after a recording of him making misogynistic comments about a female colleague was leaked online.

The development came as Western Bulldogs coach Luke Beveridge issued a formal apology to Morris after an outburst in a press conference in the wake of Wednesday night’s loss to Melbourne.

Two videos allegedly featuring Morris circulated online on Thursday. One of them featured a recording of him making the misogynistic comments.

“Fox Sports has stood down a reporter pending an investigation regarding an inappropriate audio recording,” a Fox Sports spokesperson said.

“While it is not appropriate to comment further, Fox Sports is committed to a workplace where everyone feels safe, respected and valued.”

Meanwhile the Bulldogs condemned Beveridge’s press conference tirade, in which he accused Morris of “gutter journalism” after team news was leaked earlier in the week.

“I have reflected on my comments and actions from the post-game press conference after last night’s game and acknowledge that my exchange with journalist Tom Morris overstepped the mark,” Beveridge said in a statement.

“I recognised that what I did was not OK. It was not representative of our club culture, which is so special and means so much to me.

“While I was highly emotional in the moments after a difficult loss, it is no excuse to let those emotions spill over and get the better of me.”

“The club sincerely apologises to Tom [Morris] for the incident. It is important to us that Tom is OK,” Watson-Wheeler said.

“Our CEO Ameet Bains and I have had extensive and frank discussions with Luke today. From the very beginning of those discussions this morning, Luke made clear that he understood his behaviour was inappropriate and he is deeply remorseful.

“In addition to Luke’s formal apology, the Club has agreed with the AFL to donate $20,000 to Orygen, a key partner of the Western Bulldogs Community Foundation, to assist Orygen with the important work it does in youth mental health.”