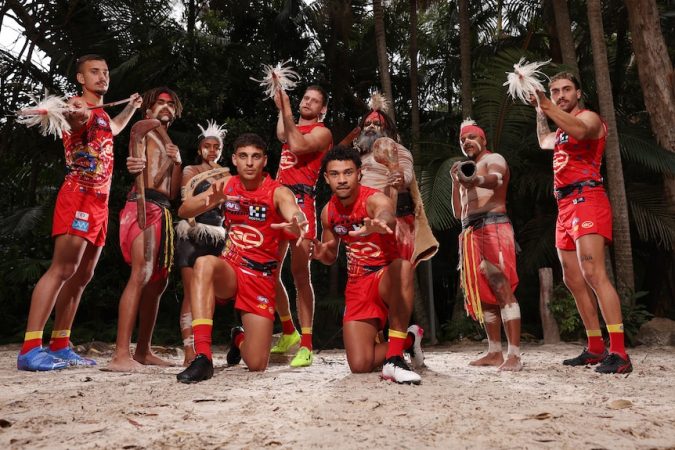 On Saturday night, when the bright lights of national television broadcasters beam down on the first AFL game in Darwin since 2020, two players in particular will put smiles on the faces of both local fans and league officials.

Darwin-born Malcolm Rosas Jnr and Joel Jeffrey, the first players recruited by the Gold Coast under a talent pipeline between the club and the Darwin region, will play in front of their home fans for the first time.

“It’s pretty crazy, not a lot of Northern Territory draftees really get the chance to play in front of their home crowd, especially in their home city,” Rosas Jnr said, who will run out for the Suns when they take on Hawthorn Hawks.

The Thunder wasn’t producing enough draft picks, was commercially unviable, and “something in the system [was] not right,” the AFL said at the time.

But eyebrows were raised when the team was shut down. How would these young players, some of the most talented yet most isolated from typical recruiting corridors, get on the radar of AFL clubs?

A pathway to the AFL

The AFL’s answer was the ‘Gold Coast Suns Academy Zone’, which would give the club first access to prospects it liked from the Darwin region.

“It [the pathway] is really good for younger draftees in the Northern Territory, because you don’t really get much AFL exposure,” Rosas Jnr, who was born in Darwin and split his time growing up between the city and the community of Bulman in Central Arnhem Land, said.

“Nobody [from the Northern Territory] got drafted the year before me.

“There’s a lot of talent up here, and you got to kind of put [young players] in a good position to better themselves and give them an opportunity to get to AFL level.”

Rosas Jnr will run out alongside Jeffrey, a mate he played junior representative football with, who carries the name of his revered father Russell, who played 50 games between St Kilda and Brisbane and is a champion of local clubs Wanderers and Palmerston, and sister Lateesha, one of the Northern Territory Football League’s most decorated female players.

He comes into the game in sharp form after kicking five goals against the Western Bulldogs last week — a performance that earnt him a Rising Star nomination.

Rosas Jnr said he was grateful to be at the Suns with his mate and to already have a bit of big game experience behind him at the ground.

In 2018, as a 16-year-old, Rosas Jnr was named in the best players for the Darwin Buffaloes in their one-point loss to Southern Districts in the Northern Territory Football League grand final.

“That was a special moment … and that was probably my biggest moment playing there,” he recalls.

“It’s probably my favourite [ground] to play on.

“Especially when you got family and friends, their faces in the grandstands and screaming for you so yeah, it’s definitely going a moment I’ll cherish for a long time.”

During the AFL off-season, which coincides with wet season Northern Territory Football League competition, Rosas Jnr is still a regular face down at the Darwin Buffaloes.

“Buffaloes is a home for me. It’s my cousins, my close family friends, they all play for them. I always see them,” he said.

And it’s in front of those dearest to him that Rosas Jnr, after being elevated to the senior side in round four and making an immediate impact kicking three goals in an upset win over Carlton, hopes to put on a show against the Hawks.

“We want to win, and I want to play my role as well. Goals are just bonuses, but [kicking one] would be good,” he said.

“My main focus is just to play my role, play to my attributes, and hopefully I can put a few smiles on my family and friends’ faces, and also the fans.”