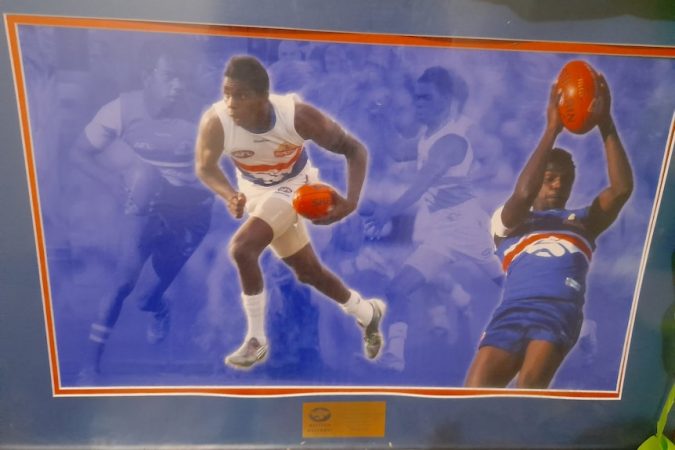 Former national and state league footballers are not a totally unfamiliar sight on the footy ovals of far-northern Western Australia.

But it is not often they put in performances as eye-catching as Zephaniah Skinner.

In only his third game of the year for the Looma Eagles, the former Western Bulldog slotted eight goals against the Broome Saints, with family cheering him on.

Skinner, who spent two seasons at Whitten Oval, was resting forward, conceding his “body is feeling a bit old”.

“It’s no stress, just having fun and kicking the ball,” he said.

Feeling good about being back home

Born in Derby and drafted as a 20-year-old in 2010, Skinner played eight games for the Bulldogs, but homesickness and a love for his country drew him back home to Noonkanbah, 100km south-west of Fitzroy Crossing.

“I feel good about being back home,” he says.

Like an increasing number of young men and women from the Kimberley playing at the highest level, he is a hero to the kids in his community.

“I’m trying to bring footy back to the community,” he says.

“I went to Looma to help out basically because there’s a group of young boys there who need that leadership.”

The distances between locations and friendly footy rivalries over the Kimberley also encourage families to travel long distances to catch up.

“I think it’s a part of our culture, getting the family together,” he said.

“I just want to give all the young boys an opportunity.”

Despite being back in the Kimberley for nearly 10 years, his pre-match routine has hardly changed much.

Skinner still scoops up a big bowl of pasta the night before a game.

ABC Kimberley will deliver a wrap of the week’s news, stories and photos every Tuesday. Sign up to stay connected.