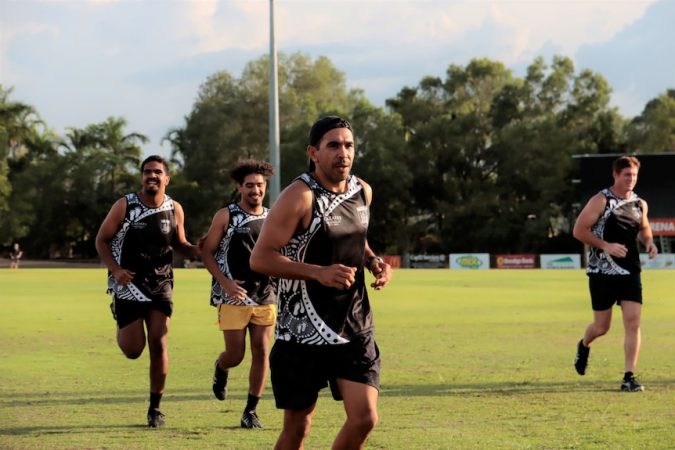 Mere months after quitting the AFL, footballing legend Eddie Betts was back in action over summer, bringing joy to fans of the Northern Territory Premier League.

Alongside Betts on the Palmerston Magpies line up was Waylon Davey, some 20 years his junior.

In one game, Betts and Davey both scored three goals. And, as the 15-year-old heads to Melbourne this year, their paths, too, are not without parallel.

Betts grew up in regional Western Australia and South Australia but arrived in Melbourne as a 14-year-old to attend a TAFE program for Indigenous youth that was overseen by former VFL player Phil Krakouer.

The small forward was famously passed over by AFL clubs in the main draft, before being picked up by Carlton in the subsequent pre-season draft. By 350 games of AFL later, he had established himself as one of the greats of the game.

Waylon Davey may never play a single match of top-level footy. However, some say he has the drive, skills and family tradition to make it work.

According to Josh Heath — the senior coach at Palmerston who plucked Davey out of the under-16s — Davey offers a sprinkling of magic on the field.

“He reads the play really well, understands where his positioning needs to be and he’s just got those silky skills.

“He kicks goals from miraculous angles and does all that flashy stuff that you see, that Cyril Rioli-type things.”

Rioli is perhaps the most prominent example of a path Davey has just stepped onto.

While Betts was drawn to Melbourne by Krakouer’s TAFE program, Rioli — and now Davey — came to attend private school.

The four-time Premiership winner grew up on the Tiwi Islands and in Darwin before moving to Scotch College in the leafy, inner-eastern suburb of Hawthorn.

Walking between manicured lawns and gothic architecture, Rioli once told the school magazine when he arrived it felt like he was in Harry Potter.

And his extraordinary football success has served as a model for others — both AFL aspirants and private schools.

Xavier College — another Melbourne private school in the city’s inner east — has offered support for Indigenous students from remote areas to attend the school for around 30 years.

With annual fees that top $50,000 for tuition and board, the school is among the elite of the country’s private schools.

According to the head of its senior campus, Michael Ilott, around 50 Indigenous students have attended the school in the past three decades.

“We want to be inclusive and open to all people,” he says.

“There’s a huge education element — that’s our main priority, and working with our students on their learning, and working out the best outcomes for them in relation to what the end-of-school means.”

Interested families complete an application and financial support is provided based on merit.

Among a group of seven students from the Northern Territory currently enrolled in the school, four are involved in the football program.

Russell Davey, Waylon’s father, was initially reluctant to let his son go to Xavier, but was ultimately convinced by the school.

“They were constantly, ‘Oh are you sure Waylon doesn’t want to come down? We’re happy to have him. We’ll work with you to get the financial side up and running’.

Lauren Motlop, Waylon’s mother, says the opportunity was hard to turn down.

“For Waylon, he’s not an academic kid. It was either he stays here and we push him through to year 10 and, if he wants to leave, get an apprenticeship or something like that.

“But we really want to see him complete school and finish year 12. This is, for us, is the best opportunity for him.”

With the Daveys on one side and the Motlops on the other, Waylon Davey has football royalty on both branches of his family. And he will enjoy the support of cousins at Xavier to help him transition.

Alwyn Davey — who played exactly 100 games for Essendon, thereby qualifying for the father-son rule — has three sons at the school.

Two of them, twins Jayden and Alwyn Junior, are names that Bombers fans are hoping the club reads out in this year’s draft.

Family support is important to Waylon Davey, who knows he’s in for a big change.

Within days of arriving in Melbourne, Davey was forced out of boarding school following a COVID-19 case, spending time in the Betts household.

Russell Davey believes there will be challenges ahead for his son, but it will be worth it in the end.

“All our [Territory] guys [who] go down to boarding school eventually get homesick, and they come back within a year, and they don’t like it,” he says.

“In our culture way, I think it’s more that our people feel a little a little bit of shame in schooling because they’re not very literate.

“I think it’s just more making them become an independent person, grow them up, and just give them the best opportunity.”

The transition is not just going to be hard for Waylon.

“I get a bit teary actually,” his mother, Lauren, says. “I’ve always had this separation anxiety from him. So it’s a massive change for me, but I have to let him go.”

All agree that an AFL career — if it ever happens — remains a long way off.

Based on the experiences of Xavier College’s previous Indigenous boarding cohort, Mr Ilott says even for the students who finish year 12, it’s more common they return home rather than stay in Melbourne.

“Just to give him the best opportunity at schooling that he can get,” she says. “That’s all we want from him right now, just do your best and we’ll be happy with that.”

But Waylon Davey keeps a twinkle in his eye: “I think I’m probably just getting started.”