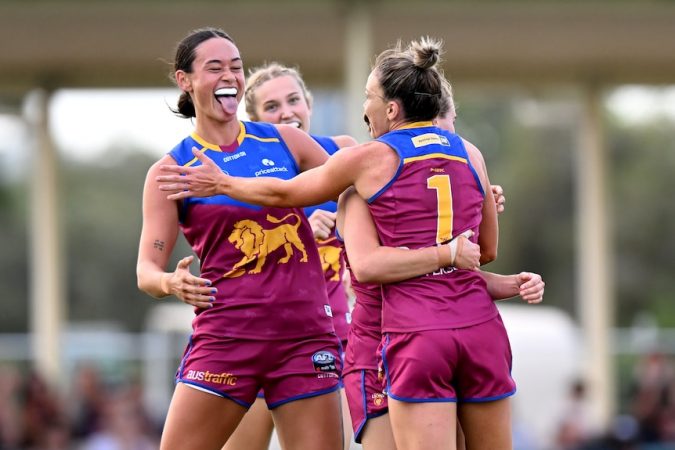 Melbourne has revived its AFLW flag push with a 12-point win over Gold Coast, who face a nervous wait for the results of scans on star defender Lauren Ahrens’s injured knee.

At Casey Fields, Karen Paxman and Lily Mithen starred in the engine room as the Demons bounced back from their first defeat of the season with a hard-fought 5.8 (38) to 4.2 (26) victory.

They were held goalless for most of the first half but kicked four in a quick burst either side of the main break to take control of the contest.

The Suns’ chances took a further hit late in the third quarter when Ahrens’s left knee twisted under the weight of a Tayla Harris tackle.

The defender, who won Gold Coast’s best-and-fairest last year and had foot surgery in the off-season, stayed down for several minutes before hobbling off the field.

Ahrens’s setback could be another serious blow to the Suns’ back line after they lost Jade Pregelj to a torn anterior cruciate ligament last week.

Gold Coast will also assess Kalinda Howarth after she left the field with a shoulder injury late in the final term.

There were more than 90 tackles laid in a tight and physical first half as Melbourne wasted a series of chances in front of goal.

They were made to pay when Alison Drennan kicked the opener for the Suns late in the second quarter before Daisy Pearce and Eliza McNamara replied, giving the Demons a 10-point lead at the main break.

Harris missed multiple shots before kicking her first goal from a free kick to push the margin out to 23 points midway through the third term.

Gold Coast kicked the last two goals of the match but never got close enough to seriously threaten a boilover.

Harris finished as the match’s only multiple goal kicker with two majors.

Jamie Stanton was Gold Coast’s best with 16 disposals and kicked a goal in the final term on the end of a sweeping passage of play that began deep in defence.

It cut the margin to 19 points but Stanton missed another chance from deep in the pocket moments later that could have dragged the Suns back into the contest.

Howarth had 11 disposals and kicked a classy late goal before being crunched in a Mithen tackle.

After a goalless first term, the Lions took control with a strong wind at their backs in the second quarter and handed the Magpies another grim reality check.

It was Brisbane’s third-straight win in a tough, 11-day stretch of matches, improving the Lions’ record to 3-1 for the season.

Bates (23 disposals) was clean where others struggled in blustery conditions and underlined her class by kicking a neat goal around her body during the third quarter.

Collingwood’s only major did not come until the dying stages of that term, when Eloise Chaston produced a clever snap from a tight angle.

It was the second time in as many games the Magpies have failed to kick more than one goal, following a heavy defeat to Fremantle in round four.

Brisbane were beaten at the clearances (20-15) but worked harder around the ground and their outside run was crucial to the win, as Greta Bodey (15 disposals), Natalie Grider (14) and Orla O’Dwyer (13) racked up plenty of touches.

Collingwood enjoyed early territorial dominance with the breeze in the first term but couldn’t make it count on the scoreboard.

Brisbane pounced, opening up the hard-fought contest in the second term.

Dakota Davidson kicked the first goal with a clever snap from the pocket before Farquharson flew for an impressive mark and converted her set shot.

Farquharson added her second from a free kick in a marking contest and could have kicked another, but her chest mark within scoring range was taken a split second after the half-time siren.

Regardless, the Lions boasted a 20-point lead at the main break.

Molloy attempted to breathe life into the Pies with snippets of eye-catching forward play but Brisbane’s dour defence held firm despite the loss of Shannon Campbell to concussion protocols.

Campbell suffered a head knock in a third-quarter collision with Pies star Jaimee Lambert as the pair competed for a loose ball.

Lambert and Ruby Schleicher (18 disposals each) were among the few Collingwood players to stand tall as midfielder Brittany Bonnici (16) had a tough battle with Catherine Svarc.