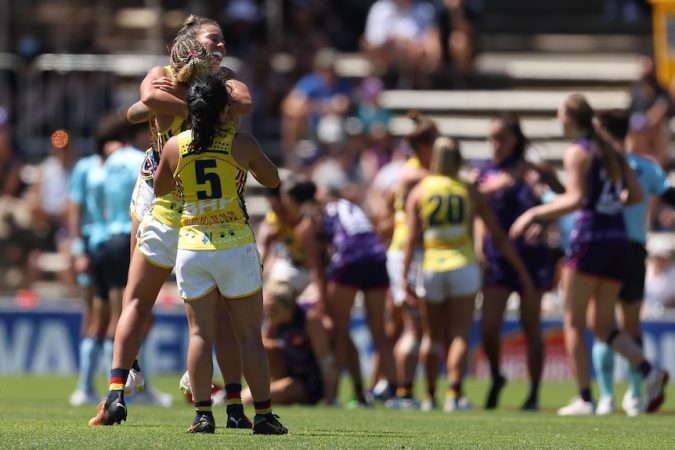 The Demons clash with the Kangaroos, while the Crows and Cats celebrate their respective victories over the Dockers and Tigers.

Two-time All-Australian Anne Hatchard produced a midfield masterclass as she inspired Adelaide to its win over Fremantle.

The Crows could not manage a goal in the third term of the match at Fremantle Oval, meaning they turned for home down by two points and kicking against the breeze.

But Hatchard produced a scintillating burst early in the final quarter, tallying nine possessions within the space of a few minutes to set up two quick goals for the Crows.

The result boosted Adelaide’s win-loss record to 7-1, while Fremantle is now 6-2.

Hatchard finished with 30 disposals and eight marks in a best-afield display, while Ebony Marinoff was also damaging with 30 possessions.

Stephanie Cain collected a team-high 22 possessions for Fremantle, with Airlie Runnalls tallying 20 disposals and a goal.

Dockers captain Hayley Miller was restricted to 10 possessions and a goal in a quiet display.

Both sides entered the match minus key players.