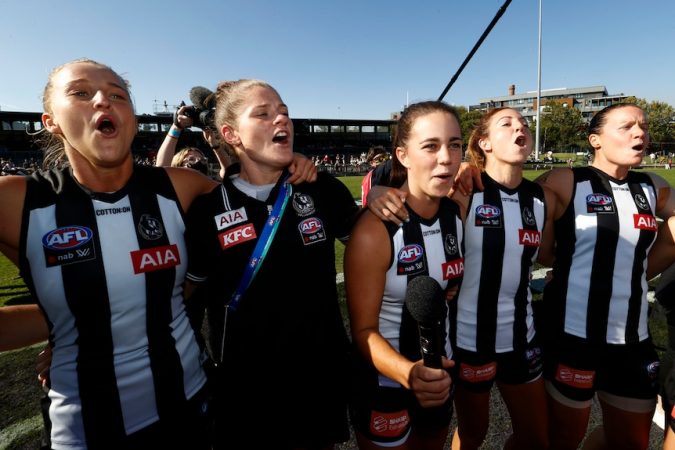 Melbourne stays in contention for the minor premiership after surviving a tense contest against Carlton, while Collingwood books a finals berth and the Kangaroos get past West Coast.

Magpies through to finals

Collingwood confirmed its spot in the finals with a 38-point win over Richmond, but the Magpies face a nervous wait on the availability of Jordyn Allen and Sophie Casey.

Jaimee Lambert starred as the Magpies recorded a comfortable 6.11 (47) to 1.3 (9) victory to secure a qualifying-final berth next weekend.

But Allen and Casey both face scrutiny from the match review officer over incidents in the first half of the clash with the Tigers at Victoria Park.

Casey crashed front-on into Tayla Stahl and made head contact as the pair contested a loose ball, while replays appeared to show Allen striking Emelia Yassir in the stomach in an off-the-ball clash.

The incidents were part of a bruising encounter, with Lambert nursing sore ribs through several crunching contests.

The Magpies’ gun on-baller was best afield with match-high tallies of 31 disposals and eight tackles before being rested on the bench for the final few minutes of the match.

The result meant Richmond finished the season with a 3-7 win-loss record, while the Western Bulldogs and Carlton were eliminated from the finals race following the Magpies’ win.

The Kangaroos tuned up for the finals with a 39-point win over West Coast, as Ash Riddell set a record for the most disposals in an AFLW match.

After defeats in their previous two matches, the Kangaroos generated some much-needed momentum with a 9.5 (59) to 3.2 (20) victory at Arden Street.

The big margin was a handy percentage boost for Darren Crocker’s side in the fight for fourth spot.

The Kangaroos will host a qualifying final in Melbourne next weekend if sixth-placed Fremantle do not overtake them on percentage.

Riddell gathered 42 disposals to surpass the previous best mark of 35, which she held jointly with Adelaide pair Ebony Marinoff and Anne Hatchard.

West Coast stunned its hosts with two of the first three goals in a hot start.

But it was all the Kangaroos from there as Emma King announced her return from an ankle injury with two strong marks that both led to goals in the opening term.

Riddell had 22 disposals in the first half as five consecutive goals gave the Kangaroos a commanding 28-point lead at the main break.

They went on with the job in the third term before cruising to a comfortable win.

Ruck-forward King was one of four multiple goal kickers for the Kangaroos, with Daria Bannister, Jasmine Garner and Tahlia Randall kicking two majors each.

The result completed a bleak season for West Coast, who took out the wooden spoon with a 1-9 record.