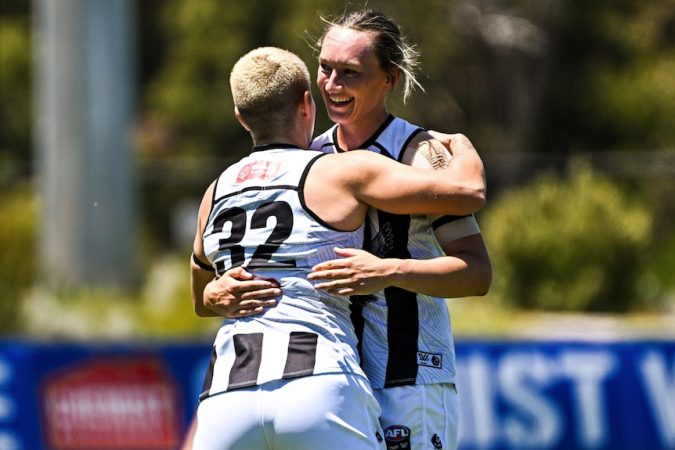 The Crows and Bulldogs clash, as the Magpies and Lions celebrate wins.

Reigning AFLW premier Brisbane has overcome a giant scare from winless St Kilda to hang on to win by five points.

The inaccurate Lions trailed the Saints until midway through the third term in oppressive, windy conditions at Trevor Barker Oval in Sandringham.

The Lions were thrashed by Adelaide in the opening round but have now put together four consecutive wins to remain in contention for back-to-back flags.

Brisbane dominated the third quarter with goals to first-gamer Luka Yoshida-Martin, and premiership heroes Sophie Conway and Greta Bodey, to head into the final break with a handy 16-point advantage.

But the Saints came again, capitalising on kicking with a significant breeze to get within three points of the Lions midway through the last quarter through goals to Caitlin Greiser and Tilly Lucas-Rodd.

The Lions prevailed, however, holding out multiple charges from the brave Saints, including an opportunity near St Kilda’s goals with just seconds to go.

It was the first match of a gruelling stretch for the Lions, who have to play four matches in 15 days after one of their contest earlier in the season was called off due to COVID-19.

The Lions have just four days to get ready to face the improving Gold Coast Suns on Thursday night.