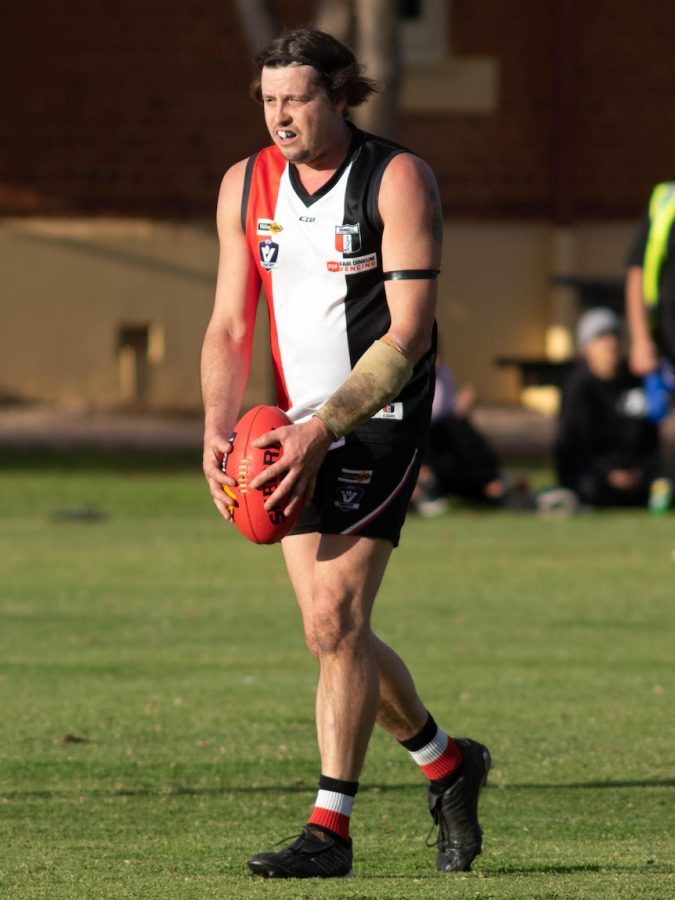 It may have been a record-breaking afternoon, but Brad Congress says he is not sure kicking 24 goals in a game of football is cause for celebration.

Congress had a day out in the Millewa Football League in north-west Victoria on Saturday as Bambill defeated Meringur by 358 points.

Congress gave all the credit to his teammates and the club who are currently top of the ladder this season, and undefeated, with an average winning margin of 174 points.

While he was pleased to break a Bambill record with 24 goals for the afternoon, Congress said the lopsided nature of the contest on Saturday made for a “strange” feeling in the aftermath.

“It’s really hard to process and express how it feels,” he said.

“Honestly, when someone asks about [the 24 goals] you almost get a little bit embarrassed.

“If you look at the scoreline … some people think, ‘Well someone had to kick them’.

“But I don’t know — you’ve still got to get the ball, it doesn’t get gifted to you, you still have to compete and kick the goal.

Congress said he had the utmost respect for the Meringur players for continuing to compete in difficult circumstances.

“It takes a lot of pride for them to keep getting up and going again, so good on them.”

Meringur president Peter Mangan said there was also no hard feelings from the 55-goal loss.

He said there had been “a lot of rubbish” posted on social media about the result suggesting Congress and Bambill should not have piled on so many goals while Meringur remained scoreless.

“But if the roles were reversed and we were the best team in the league we would be out to pump the opposition just as much as they did,” Mr Mangan said.

“Every week we go out and try our best. We expect others to do the same.

“At the end of the day, 24 goals from one bloke is a pretty good effort.”

Mr Mangan admitted not scoring at all on Saturday was tough to watch.

He said the issue of lopsided country football results appeared to have been exacerbated by the pandemic, with many players not returning to community sport after cancelled seasons in 2020 and 2021.

“We’re not lonesome doves here. It’s all over Victoria,” he said.

“I look at all the footy scores and every league has the same teams getting smashed every week.

“But nowadays people lose sight of what it’s about. Everyone wants to win flags, but it’s really about getting the kids to play sport, the club atmosphere, the friends you make.

And for Congress, he’s now leading all comers in regional Victoria with 87 goals to his name after just nine rounds of football.

He said if he reached 100 this weekend against Werrimul, it would be “another great achievement for the football club”.

ABC Mildura Swan Hill will deliver a wrap of the week’s news, stories and photos every Wednesday. Sign up here