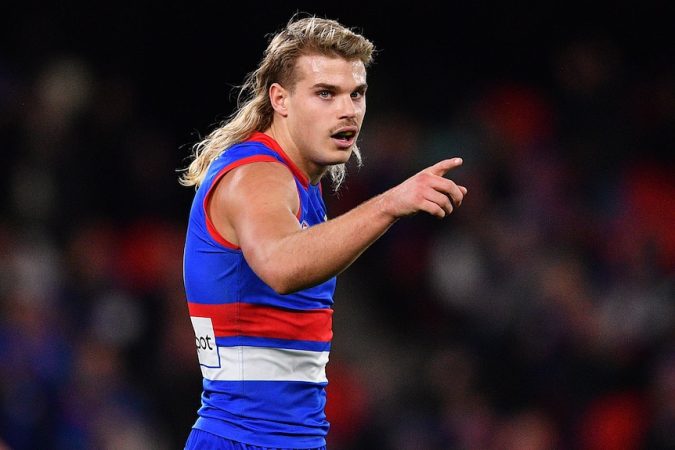 There are few issues able to tie the so-called “AFL industry” in knots as much as its illicit drugs policy.

The Western Bulldogs’ Bailey Smith’s very public outing of drug use has once again thrown the policy into the spotlight and given rise to a renewed debate about its strengths and weaknesses.

Smith’s coach, Luke Beveridge, called for the policy to be scrapped, while Hawthorn president Jeff Kennett wants it strengthened, calling for zero-tolerance and a two-year ban without pay for players caught taking drugs.

Smith has publicly spoken about his battles with anxiety in the past and since photos of him holding a bag of white powder were published, first on social media and subsequently across news outlets.

He said he was taking drugs to help him cope with his mental health in the aftermath of last year’s grand final loss to Melbourne.

“I do get waves of chronic anxiety,” he told the Herald Sun.

“That period after losing the grand final, being away from home for a while, plus my own mental health issues that I’ve spoken publicly about, culminated in some poor decision making.

“It was more the aftermath of just lots of cameras in your face, lots of TikToks being made … just felt like I didn’t get a breather and coming out of such a pressurised environment … and not knowing how to deal with the pressure afterwards.

“I reckon I went days without eating, even brushing my teeth, leaving my bedroom, couldn’t talk to people.

“I couldn’t even get out of bed to go to training.

“It’s not an excuse to why I acted the way I did, but it certainly does provide context to why I made such a stupid decision that I did.”

Smith will face the AFL’s integrity unit on Tuesday and it’s possible he’ll be offered a two-match ban for “conduct unbecoming”.

It’s the same penalty given to former Adelaide and now St Kilda player Brad Crouch in 2020 when he was caught in possession of drugs with his former teammate and now Geelong player Tyson Stengle, who was banned for four matches.

Former GWS player Shane Mumford was also given a two-match ban after a video taken of him snorting a substance in 2015 emerged three years later.

But any AFL sanction is quite separate to the process under the AFL’s illicit drug policy, which allows players three “strikes” if they’re found to have taken illegal drugs.

A player with a first strike is given a $5,000 fine and counselled, but the information is kept strictly confidential.

The player remains anonymous and only the club’s doctor is told, so that they can help form a plan with the player including potential counselling and treatment.

It’s only when the player has a second strike that the player’s name is publicly released, and they’re given a four-match suspension and another $5,000 fine.

No player has been publicly outed for two strikes since the policy was updated in 2015 and only one player has received three strikes — Hawthorn’s Travis Tuck in 2010.

It leads to the accusation that the AFL has rubbery standards on illicit substances, as it appears the two-match ban for “conduct unbecoming” only comes into place when the player is publicly caught taking drugs.

The approach seems to be allowing players to sniff, smoke or inject in the privacy of their own homes — or at the very least away from the prying mobile phones in Gold Coast nightclubs — then you’ll remain unpunished, apart from a relatively small fine.

Bailey Smith — the most popular player in the AFL if social media followers are anything to go by — was never going to snort drugs in a nightclub without a myriad of mobile phones recording his every move.

Smith said the drugs were a means of coping – call it self-medicating — and it’s why coach Beveridge said “it’s essentially a health issue for him”.

Beveridge is no fan of the illicit drugs policy and takes issue with the AFL Players Association (AFLPA), which helped draw it up with the AFL and drug treatment professionals.

“None of us really feel it works,” he said.

“Essentially any player with a clinically diagnosed mental health challenge will never be exposed to the policy anyway. Regardless of when you’re tested you’re always going to get a pass.

“So that’s a real chink in the actual process.

“It needs to be reviewed all the time; I’m a big believer that it should disappear.”

The ABC asked the AFL Players Association to respond to Beveridge’s comments, but it declined.

So, what is this “chink” in the process that Beveridge refers to?

It’s the same one that Riewoldt referred to as “wriggle room” when he spoke out about drugs in the game last month, after former teammate Sam Fisher appeared in court on serious drug trafficking charges.

Under the illicit drugs policy, a player with a diagnosed mental health condition can enter a program, where they can receive counselling and medical care.

They’ll be target-tested while they’re in the program but won’t get a positive strike if they test positive.

Obviously, the players in this group remain confidential and it’s for that reason we don’t know whether Smith was one of them and whether he will record a strike.

But if he was, it will be interesting to see whether that remains confidential such is the interest in his case and the amount of information that seems to find its way into the public domain.

It’s here we see the wide divergence of views over the policy from those like Jeff Kennett, who favour zero-tolerance, to Beveridge, who wants it tossed out, to the AFLPA, which believes it does good work.

The very fact that it operates behind closed doors – as it should to protect privacy – means the public doesn’t know how effective the policy is.

The AFL doesn’t publish figures on how many players record a strike and we don’t know how many people are participating in the program for those who have a mental health condition.

But there are those on the inside who say the policy has helped many players.

Most agree the fundamental aim of the drug policy should be to protect players’ health.

‘Just say no’ doesn’t work, so there’s no point pretending drugs aren’t an entrenched part of society, particularly among young people – the very demographic that makes up the AFL’s playing list.

As Beveridge said: “As a father of two young boys who are 23 and 21, I’ve got a fair understanding that no-one’s immune to it.”

The question at the heart of the debate over the policy is: what is the best way to help players who may be struggling with drugs or mental health issues?

Is it zero tolerance or open slather – or might the answer lie somewhere in the middle?