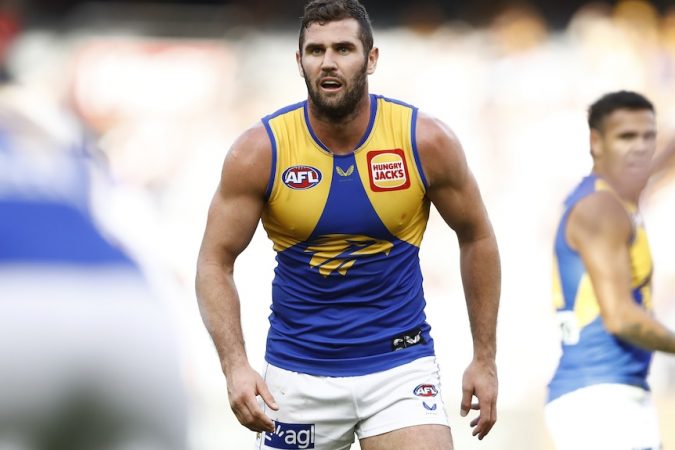 West Coast has been hit by a severe COVID outbreak on the eve of its trip to Melbourne to face the Kangaroos, with a dozen players ruled out after contracting the virus.

The cluster has left the Eagles struggling to field a team, with coach Adam Simpson saying as few as 17 listed players will be available to face North Melbourne on Sunday.

Twelve players who featured in round one against Gold Coast are unavailable for this weekend.

It means the club will have to rely heavily on state league top-up players to field a team.

And West Coast is bracing for more players to test positive in the coming days, having seen the virus spread rapidly around the club.

Simpson said the Eagles would have to hand AFL debuts to players who have never even trained with the team.

“I am going to meet some players for the first time,” Simpson said.

“It is unique but it is just reality.

“There is no point crying about it, we have got to get on with it.”

The AFL has been determined to proceed with games even when clubs are being affected by COVID outbreaks, implementing the top-up system to ensure matches continue.

Simpson said the Eagles were in discussions with the league but expected the game to go ahead.

“We are talking to the AFL about if it gets to the next layer, another level,” he said.

“But I can only deal with what we have got.”

The outbreak comes at a terrible time for West Coast, which has experienced a tough run with injuries leading into the season.

A depleted Eagles side lost at home to Gold Coast in round 1 and now faces the possibility of starting its season 0-2 ahead of a western derby the following weekend.

But there is some good news for West Coast, with forward Jack Darling set to play his first game of the season.

Darling had been banished from the club due to not meeting vaccination mandate requirements but was allowed to return on the eve of the season after getting the jab.