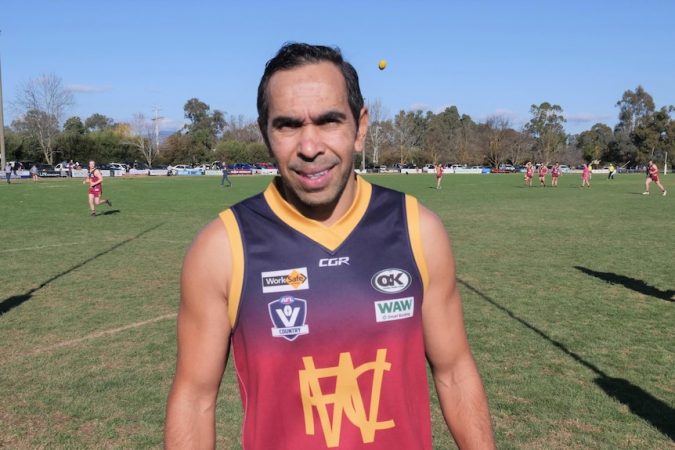 Whorouly residents have called it a “huge” and “exciting” development for the town’s football club, with AFL legend Eddie Betts donning the team’s colours and playing for the side over the weekend.

Hundreds of spectators gathered at the town’s Recreation Reserve on Saturday to watch the iconic Carlton and Adelaide Crows player dazzle up front.

While the side lost 49–65 to their opponents, Goorambat, the day provided a much-needed boost for the team, club, and the community.

“Two years of COVID has really had an impact on a lot of clubs. We’ve had bushfires, we’ve had everything going on the last few years,” he said.

“This is just huge. Everybody is just that excited. Massive call on him — he’s an absolute gun for what he’s doing.”

Whorouly player Daniel White is Betts’ brother-in-law and said the former AFL player promised to come up and play for the local team once he retired.

“Last Friday night he rang up and said, ‘I’ll be up next weekend, can you organise a game?’” he said.

“So I put a call into Ed [Costenaro] to see if we could get him a spot and sure enough we got him on the field.”

He said it was a funny moment when the team watched Betts come into the change room on Saturday.

“As soon as Eddie came into the room, it went silent and everyone’s just staring at him. They’re like, ‘We’re not sure what to do!” and I’m like, ‘Just treat him like anyone else’,” Mr White said.

“It’s just the effect he has on everybody being such a legend of the game.”

A number of former AFL players, including Betts, Jarryd Roughead and Mick Malthouse, have recently helped out a number of community clubs across the state that have struggled to bounce back from the impacts of COVID.

“To get ex-AFL players is just huge for clubs. A lot of small towns really need something like this,” he said.

Betts said it was important to bring some joy to the community and get kids to come out and watch the game.

“They might never get to see an AFL player in their lives,” he said.

“To come out and show my face and put smiles on their faces is rewarding for me.”

Funding and visitation boost for club

She said gate takings were a lot better than usual.

“A bit more than three times our normal gate.”

Ms Kneebone said it was exciting to see visitors from towns like Kergunyah and Wahgunyah come out to the match as well.

“It’s really good to have that visitation that we don’t normally get because it means that the funds have come from external to our community,” she said.

“[Funds] coming into our community rather than the community supporting itself. That makes a big difference.”